Be a Pain: An Album for Young (and Old) Leaders 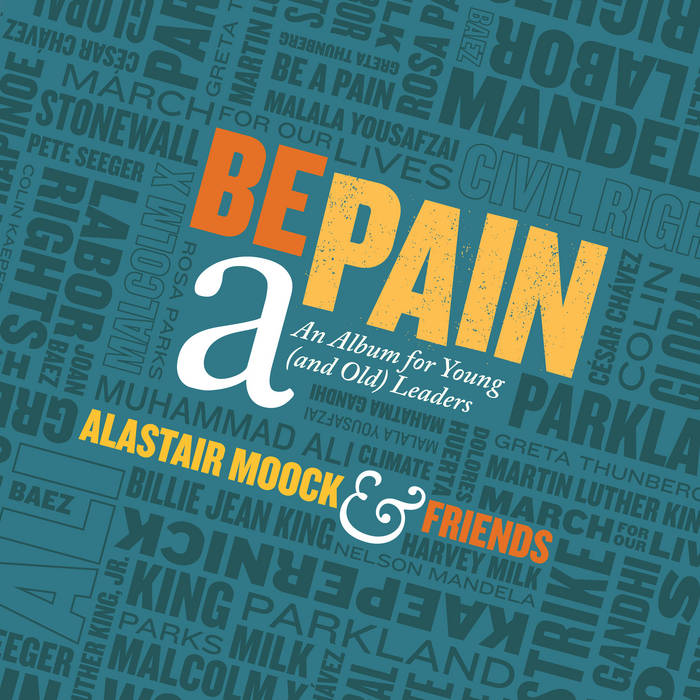 Tess Absolutely brilliant, inspiring, and empowering. NOT just for kids. Thanks for once again sharing your transcendent artistry with us, Alistair & Co. Young artists, your work is *amazing*! Favorite track: What is a Leader? (Feat. Rani Arbo & some smart kids).

skunk1966 I just love the music he creates. Also he's a very nice and caring person

Alastair Moock’s new album, Be a Pain, is a joyful, musical rallying cry for young (and old) leaders in these turbulent times. It looks to the heroes of our past (Dr. King, Harvey Milk, Billie Jean King, Pete Seeger, Cesar Chavez, Rosa Parks, Malcolm X) and our present (Malala Yousafzai, the Parkland student protestors, climate change marchers) to inspire our kids to move the ball forward. The album features guest turns from a powerful and diverse group of musicians and change-makers, including Sol y Canto, Alisa Amador, Reggie Harris, Mark Erelli, Melanie DeMore, Kris Delmhorst, Rani Arbo, Crys Matthews, Sean Staples, Heather Mae, Boston City Singers, and GRAMMY-nominated producer Anand Nayak.
Moock’s plan is to give away free copies of the album –– along with free programming on social justice history –– to underserved schools in the Boston region and beyond. So far, the fund has raised over $10,000 towards that goal. More info here.Boston City Singers

Alastair Moock is a 2014 GRAMMY Nominee, two-time Parents’ Choice Gold Medal Winner, and recipient of the ASCAP Children’s Music Award. Long one of Boston’s premier folk artists, Alastair turned his attention to family music after the birth of his twins in 2006. The New York Times calls him “a Tom Waits for kids” and The Boston Globe declares that, “in the footsteps of Pete Seeger and Woody Guthrie, Alastair Moock makes real kids’ music that parents can actually enjoy.”

“How lucky we are to have Alastair Moock around these days! When too many adults are role modeling the pursuit of fame, fortune, or personal gain, Alastair’s songs encourage our kids to pursue goodness, kindness, awareness and courage. Adults might listen up!”
- Nora Guthrie, President, Woody Guthrie Publications

“With ‘Be a Pain,” Alastair puts himself firmly in the tradition of singers, songwriters and activists who know that music can move people towards a better world. The songs are rock solid in melody, singability, and meaning. This album should be played out loud, not on headphones, so everybody in the room hears it and sings along.”
– Bill Harley, multiple GRAMMY-winning children’s artist